This week’s episode is really dear to me as it features STIMY’s most senior guest to date: at 83-years-old, Dato Thomas has a really unique perspective of Malaysian history, being the son of Malaysia’s first Finance Minister, colleagues with Malaysia’s 3rd Prime Minister (he grew up knowing the 1st & 2nd Malaysian Prime Minister too) & entering the Malaysian legal society during its nascent years, no long after Malaysia’s independence.

Also, STIMY is taking a break this week as I’m in the middle of conducting 6 interviews in the next 7 days! (But they’re possibly some of the most exciting guests from Malaysia to the US to Nepal, but research is intense so I’ve decided to be a little kind to myself). 😊 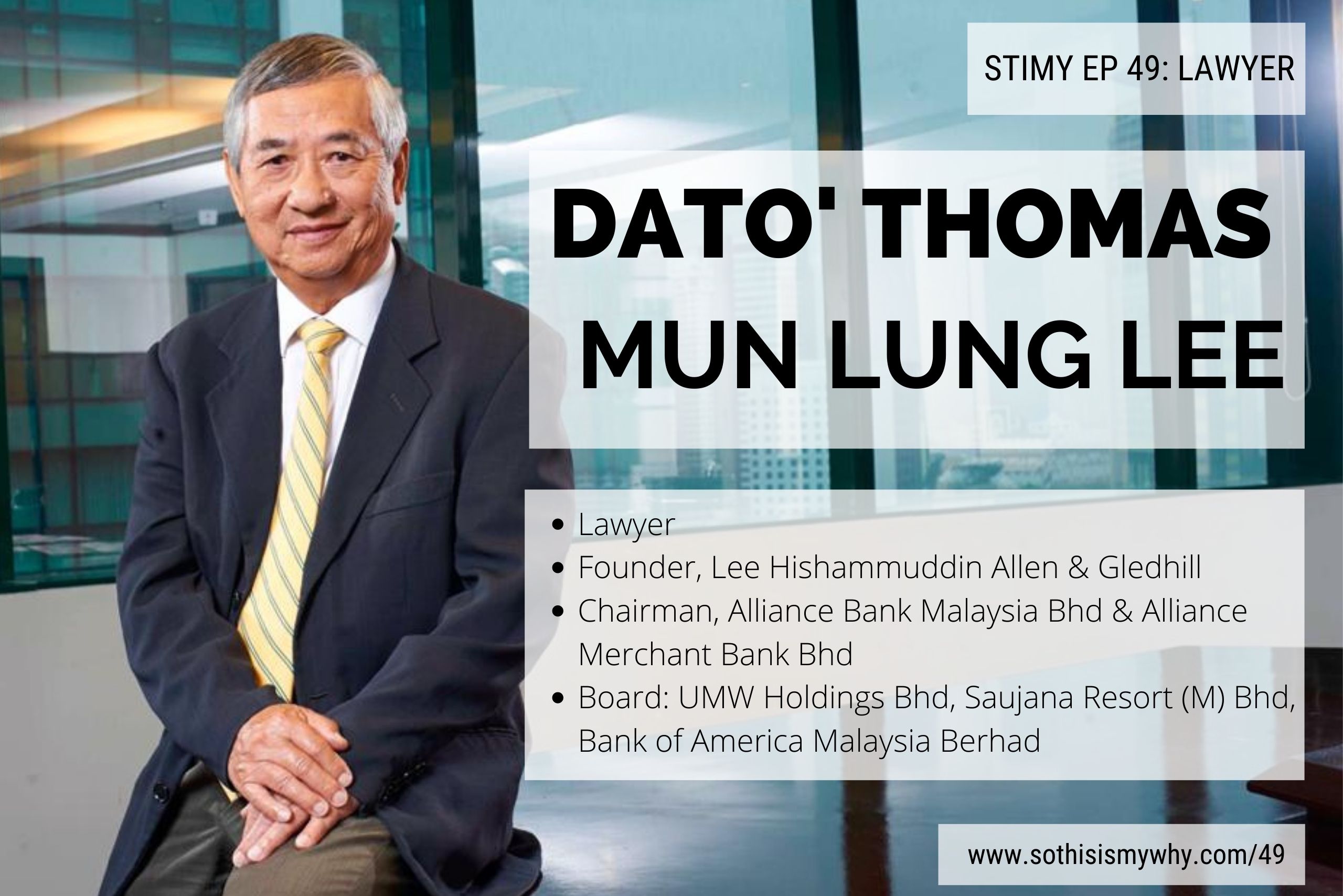 He was also Chairman of AIA Public Takaful Bhd & AIA Malaysia Berhad, had directorships at AIG Malaysia Insurance Berhad, was a member of the Appeals Committee of Bursa Malaysia Berhad and Chairman and Non-Executive Director Alliance Bank Malaysia Bhd & Alliance Merchant Bank Berhad. He also served on the Board of UMW Holdings Berhad, Saujana Resort (M) Berhad and Bank of America Malaysia Berhad.

Last but not least, he is also the son of Tun HS Lee – Malaysia’s first Finance Minister!

​In this episode, we cover Dato’ Thomas’ life story, beginning with his earliest memories (of air raid sirens & bombs dropping over Kuala Lumpur!) to then fleeing to India after the Japanese placed a bounty on his father’s head, and how he eventually made his way to the UK with his brother for his studies at the age of 13.

Looking for past STIMY guests ? Check out:

Given the recent total lockdown/rise of positive cases in Malaysia, I thought this was an interesting article as it shares how the writer tested positive (after an initial two negative tests) and her experience thereafter that included goign to the CAC (COVID Assessment Centre).

​Extraordinarily detailed & insightful – though I hope no one ever needs to make use of this information! Stay home, stay safe, everyone. 😊

I recently discovered this wonderful Filipino artist who makes the most incredible & intricate paper-based work.

What’s interesting is that he is also getting into the NFT field, which he charts online. But the above is still my absolute favourite.​

P/S: One of STIMY’s upcoming guest also does gorgeous paper-cutting art but of a different kind.

The global pandemic caused an immediate overhaul of the format of US late night TV shows. None more so than the Late Late Show with James Corden, where he spent 4 months broadcasting from his garage, before returning to the studio but with a difference: there are no live audiences, but the crew is now actively featured in the show.

Why do I mention this?

Because in recent weeks, the CBS Senior VP of Late Night Programming, Nick Bernstein, joined the crew, and it’s been such fun watching the crew banter, pushing the boundaries (by trying to get free stuff & cruise rides! To the chagrin of the CBS marketing team), & Nick’s soaring online popularity (from 20 to 3,000 LinkedIn views).

So I reached out asking if Nick would be open to an interview on STIMY… and he said yes!!! 😅

Here are some episodes that I would recommend watching if you’d like to know what’s been happening with the Late Late crew (specifically, Nick):

I recently discovered this show during my research for an upcoming STIMY guest, Kendrick Nguyen, who is the co-founder of one of the top US equity crowdfunding platform called Republic.​

Meet the Drapers features the Draper family (famous VC family) & guest judges (one of them included Kendrick!) and every episode, 3 startup founders pitch their companies to the judges. It’s the kind version of Shark Tank and what’s unique is that for anyone listening, if you liked the companies, you can go onto Republic and invest in those companies yourself!

I’ve inserted the link below to the episode where Kendrick was featured, which showcases pitches from a curated wedding vendor platform, a crowdsourced driven platform that uses AI to customise art for collectors/businesses & a P2P sports-betting platform.