Welcome to Issue 8 of the STIMY Newsletter featuring Darrion Nguyen aka Lab Shenanigans aka the Asian Millennial Tik Tok answer to Bill Nye the Science Guy!

Malaysia’s into its second week of MCO (i.e. Movement Control Order, where everyone is required to stay indoors unless you’re involved in essential services) but it seems like while toilet paper continues to be in stock, tempers are flaring over the short operating hours for restaurants.

As SCMP reports, #SiBodohKauDengerSini (i.e. Malay for “you idiot, listen here”) is trending on Twitter because the delivery apps have been unable to cope with food delivery orders, leaving certain Malaysians hungry at night. Oops. 😳

Meanwhile across the pond, Joe Biden will be sworn in as the 46th President and some of stand-up comedians are literally breaking out into Broadway-esque song: 🤣

​While this week’s STIMY guest doesn’t dabble in singing, he has a theatre background & has leveraged his love of acting and science to create a viral brand known as “Lab Shenanigans”. 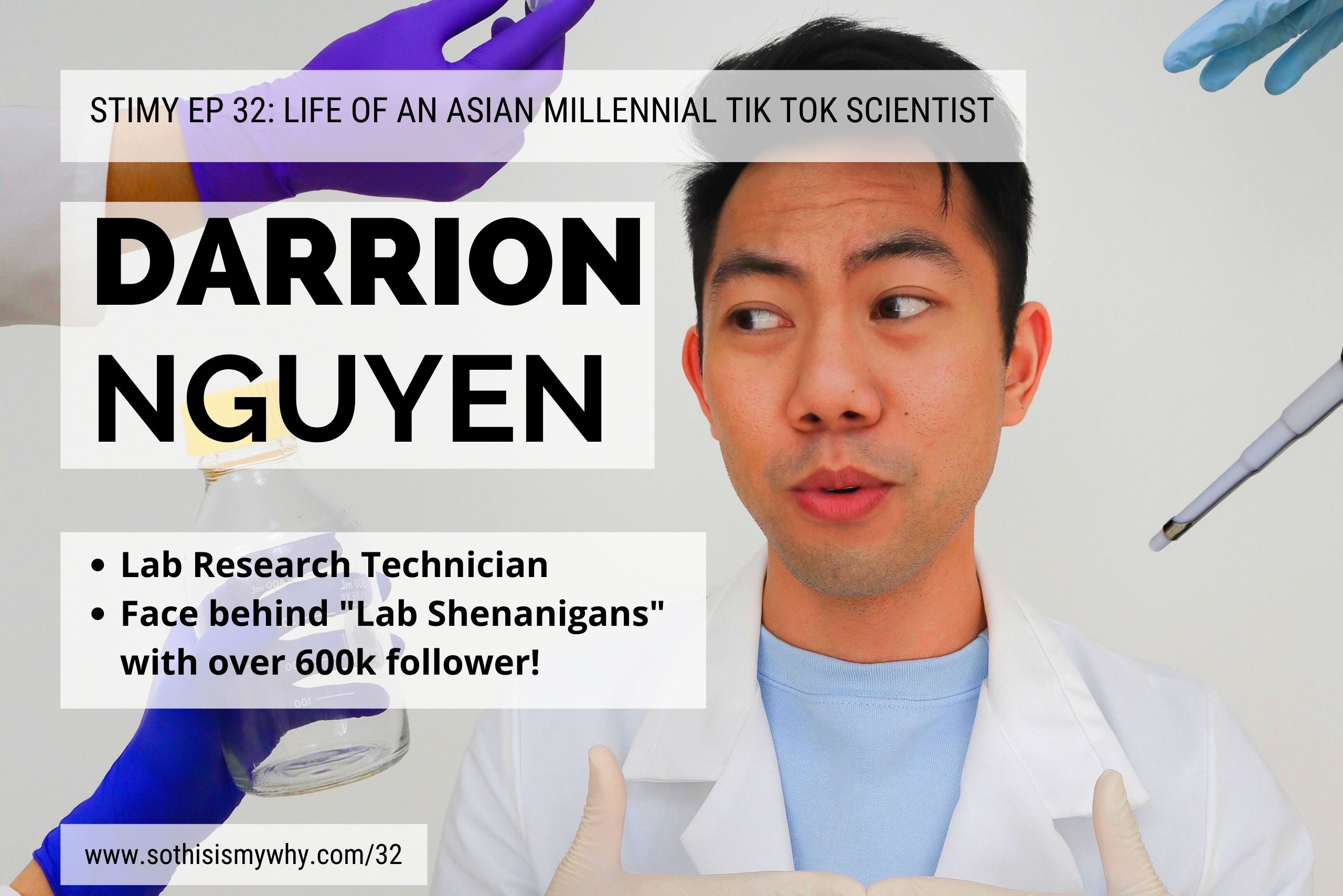 Darrion Nguyen is currently a lab research technician at Baylor College of Medicine & the face behind “Lab Shenanigans”: a social media brand that makes fun, easily digestible science content & has garnered over 600,000 followers to date (½ million on Tik Tok!)!

But who is Darrion? How did he end up discovering and marrying his twin loves of theatre & science? How does Tik Tok actually work, and how can others do the same?

We unpack all of the above & more in this week’s STIMY episode.

Looking for past STIMY guests in the creative world? Check out:

A clip where Cesar Kuriyama shares how he first got the inspiration that would lead to the founding of his mobile tech company, 1 Second Everyday

So here’s my main takeaway from speaking with Darrion about Tik Tok (gosh, really felt my “age” there!!): one of the ways to go viral isn’t just through dance videos, but also in being on Tik Tok so constantly, you start to see “trends”. Whether it’s something people always say, sing to, or do, it’s what everyone is jumping on to.

What causes Tik Tok to go viral remains obscure, but here’s the latest one: Sea Shanties.

What are Sea Shanties?

A sea shanty is a working song that sailors used to sing while doing manual tasks. Acapella style, of course.

Who started the Sea Shanty trend?

26-year-old Nathan Evans, a postman from Glasgow Scotland, posted his rendition of Wellerman (a 19th century New Zealand folk song) on 28 December. To date, the Tik Tok video has garnered over 1 million likes, 14.7 comments & caused the #seashanty hashtag to blow up with over 89 million views!!

Sea Shanties has some famous fans too, including Stephen Colbert who recently covered it in his Quarantinewhile episode on The Late Show (he starts at 3:23 minute, which you can watch here).

The Guardian article on this recent Tik Tok trend can be found here, which also includes links to some of the other viral Sea Shanty trends that are taking over, well, the world! NPR also did a 4-minute episode on it here.

Tik Tok is still a giant mystery for me but this trend? I can get on board. It’s pretty good!

Also, I had no idea Stephen Colbert could sing!

TTKU (Try To Keep Up)

If you’ll recall in Darrion’s episode, I asked him what he meant whenever he posts an Instastory “What’s the tea?!” or “What’s the mf-ing tea”?!!

Which of course, is just the tip of the iceberg. There’s also AMA, SMF, TL:DR & TFTF… and what do they all have in common?

Sure, you have the common ones like WFH (which everyone should know by now!), BTW (by the way), NSFW (not safe for work), but there are more obscure ones. And ones that Gen Zers are using. So how do we keep up?!

By referring to Hootsuite’s recent article which provides a comprehensive list of the following types of abbreviations used in business, social media, and among Gen Zs, what they stand for & the context to use them. Here’s a sneak preview: 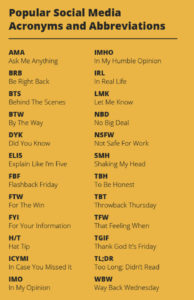 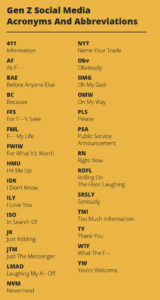 This article is great for deciphering everyday acronyms. 😅

I first heard of AMA (Ask Me Anything) while trolling the Reddit boards. In particular, there is an AMA Reddit board where every once in a while, prominent people will appear to answer questions that users might have for them. They will introduce themselves, what they’ve achieved & also attach a photo of themselves referring to AMA so that you’ll know the one posting is really them.

The most recent one was by Justin Kan – an American tech entpreneur most known for being the co-founder of Justin.tv & Twitch. The last time Justin did an AMA was 5 years again, and his recent one really blew up with over 1.8k comments!

Some personal highlights for me: 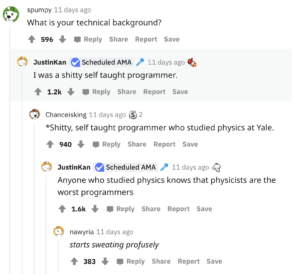 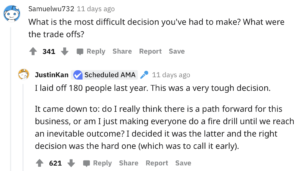 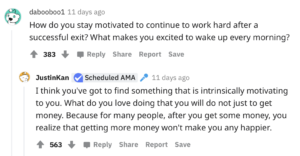 Back in 2012, Renny Gleeson gave a funny but impactful 4-minute TED talk on the dreaded 404 page & how it can actually be turned into an opportunity to build better relationships. A talk that has generated over 1.8 million views to date.

Who is Renny Gleeson?

Renny Gleeson is a game developer turned ex-MD of the Business Innovation Group at Wieden + Kennedy, Strategic Advisor at the Aspen Institute & Founder of BIG (amongst others).

The default page you get when you search for a website that doesn’t exist / the web link is broken and originates from a whole family of errors.

In his talk, Renny described getting a 440 page like:

Then proceeded to show 404 pages that encompassed that feeling of brokenness. A cyclist that crashed into a barrier, somersaulted in the air before landing painfully. A dog staring wistfully at you with its puppy eyes… unconventional 404 pages that grabbed the viewer’s attention.

This is an error page, but what if this error page was also an opportunity?

Because as Renny puts it, “little things, done right, matter”. Instead of leaving the 404 page as a pure error page, turn it into a little moment of opportunity to connect with your potential audience. Because your brand isn’t made of a single experience, but the summation of a series of micro-moments.

This 4-minute TED talk is a great exploration into why all small things matter.

Do you know anyone with an interesting/inspiring story? Or someone whose backstory you’d love to hear?