Welcome to Issue 20 of the STIMY Newsletter featuring Nick Bernstein – Senior Vice President of Late Night Programming (West Coast) at ViacomCBS and executive in charge of the Late Late Show with James Corden!

Last week was pretty eventful & linked to today’s highlighted guest so if you missed out, let me get you up to speed!​

In our last newsletter (you can catch up HERE), I mentioned how STIMY would soon feature a CBS Network Executive in charge of the Late Late Show with James Corden, aka James Corden’s Big Boss. And that episode has indeed been released (we will get to that in a second).

What was surprising was how after that lovely, 3-hour chat with Nick Bernstein, Nick then went on air and mentioned how he had just done a 3-hour podcast interview with me. And Ian (the head writer) then said, on the Late Late Show, that I needed to release that episode ASAP!

​And in the meanwhile, James started referencing Nick’s podcast in his segments.

​Part 1 was released on Sunday, and the Late Late crew discussed it the following day. Poor Nick was roasted quite badly, so it was quite providential that earlier that day, he had received the following package (p/s: the “Junior” VP is an inside joke): 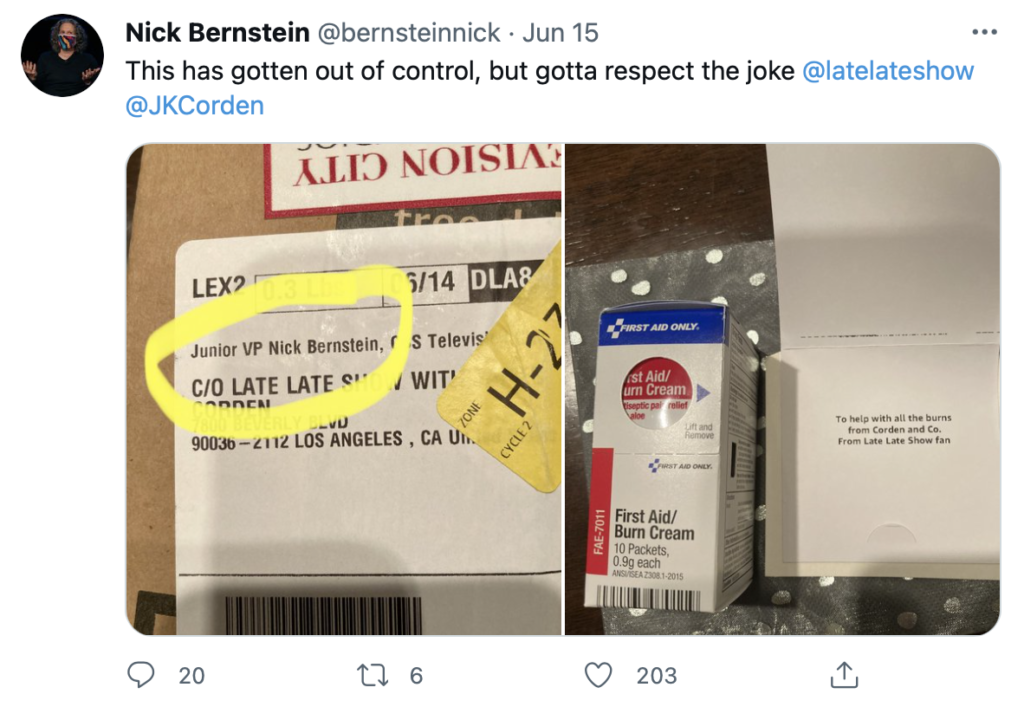 Then Part 2 was released on Wednesday. And again it was discussed by the Late Late crew on Thursday. Thankfully, it ended much better for Nick & with love all around! Resulting in this Tweet: 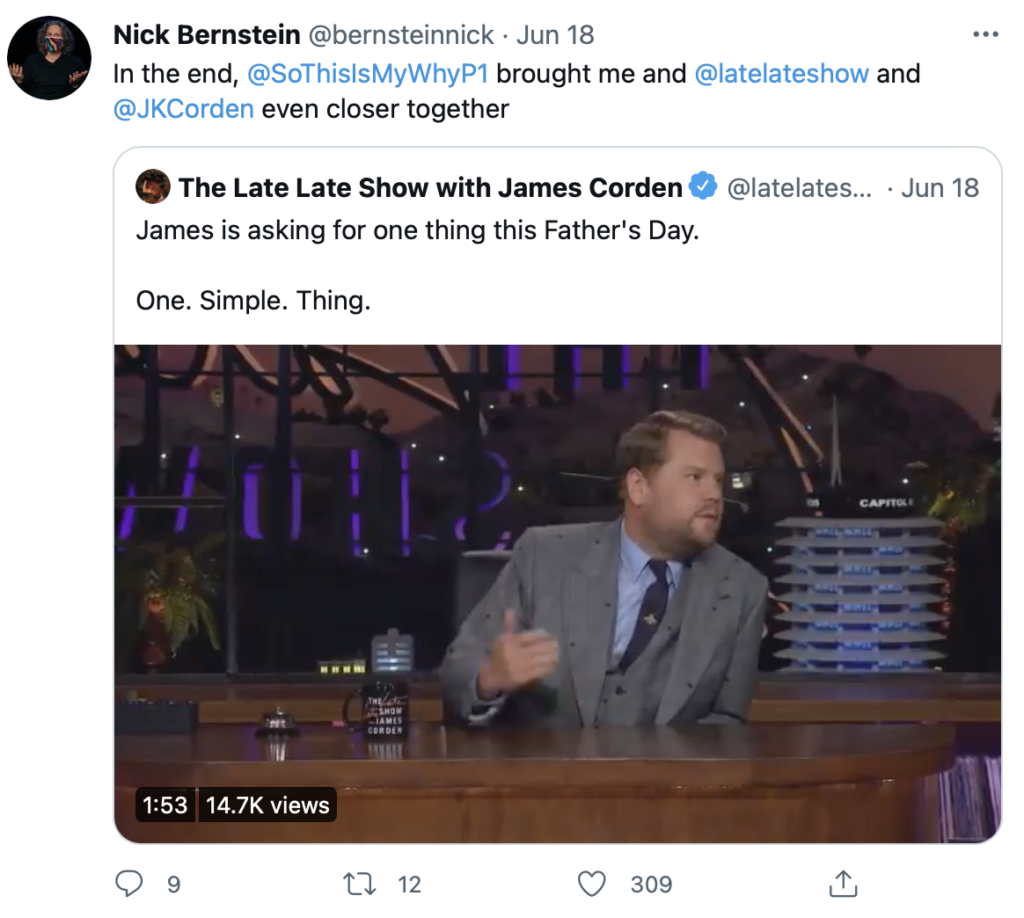 And to top off a week’s worth of hilarity, the Late Late show released a highlight reel of what had gone down with the crew, saying that “We’re Basically a Podcast Review Show Now“. 🤣 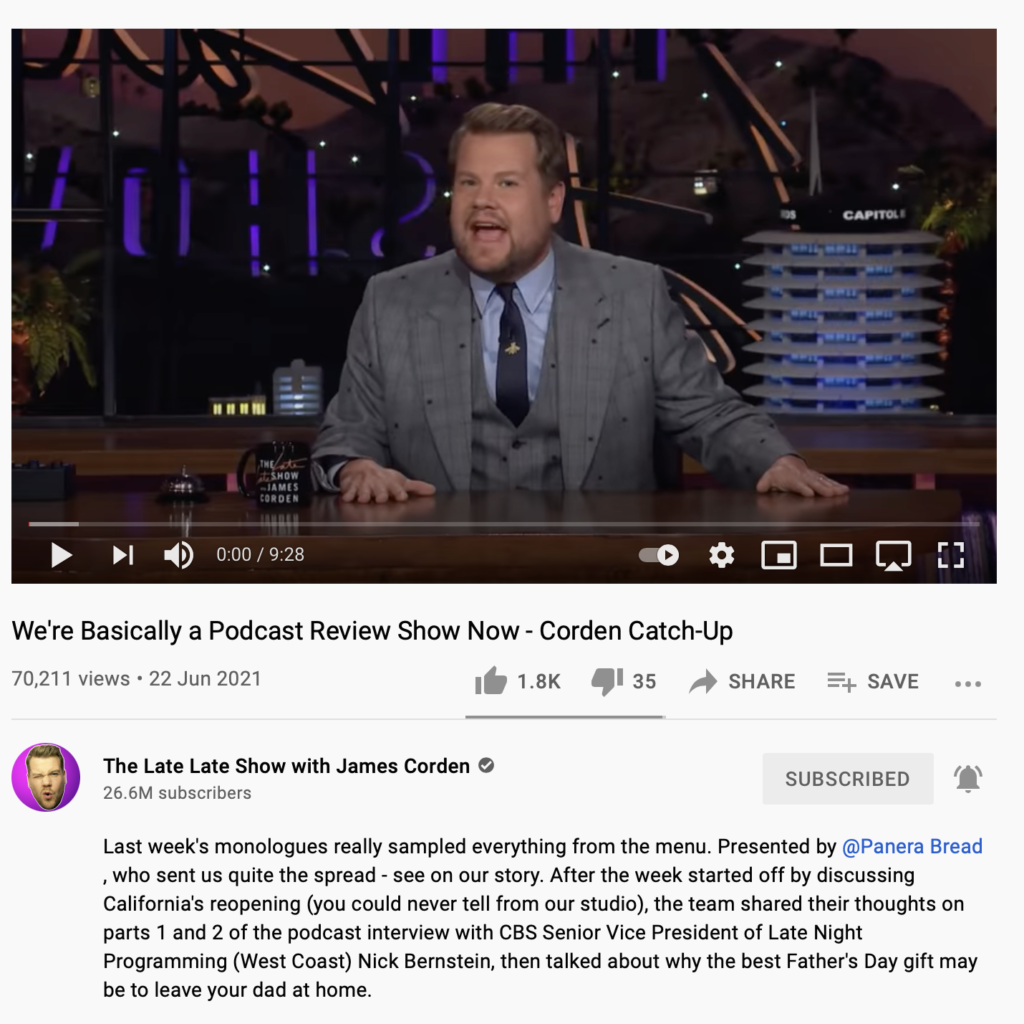 And there you have it!

​As James would say it, you’re all caught up now. 😊

If you want to see a quick YouTube reel of all of STIMY’s mentions on the Late Late show, you can watch it HERE. 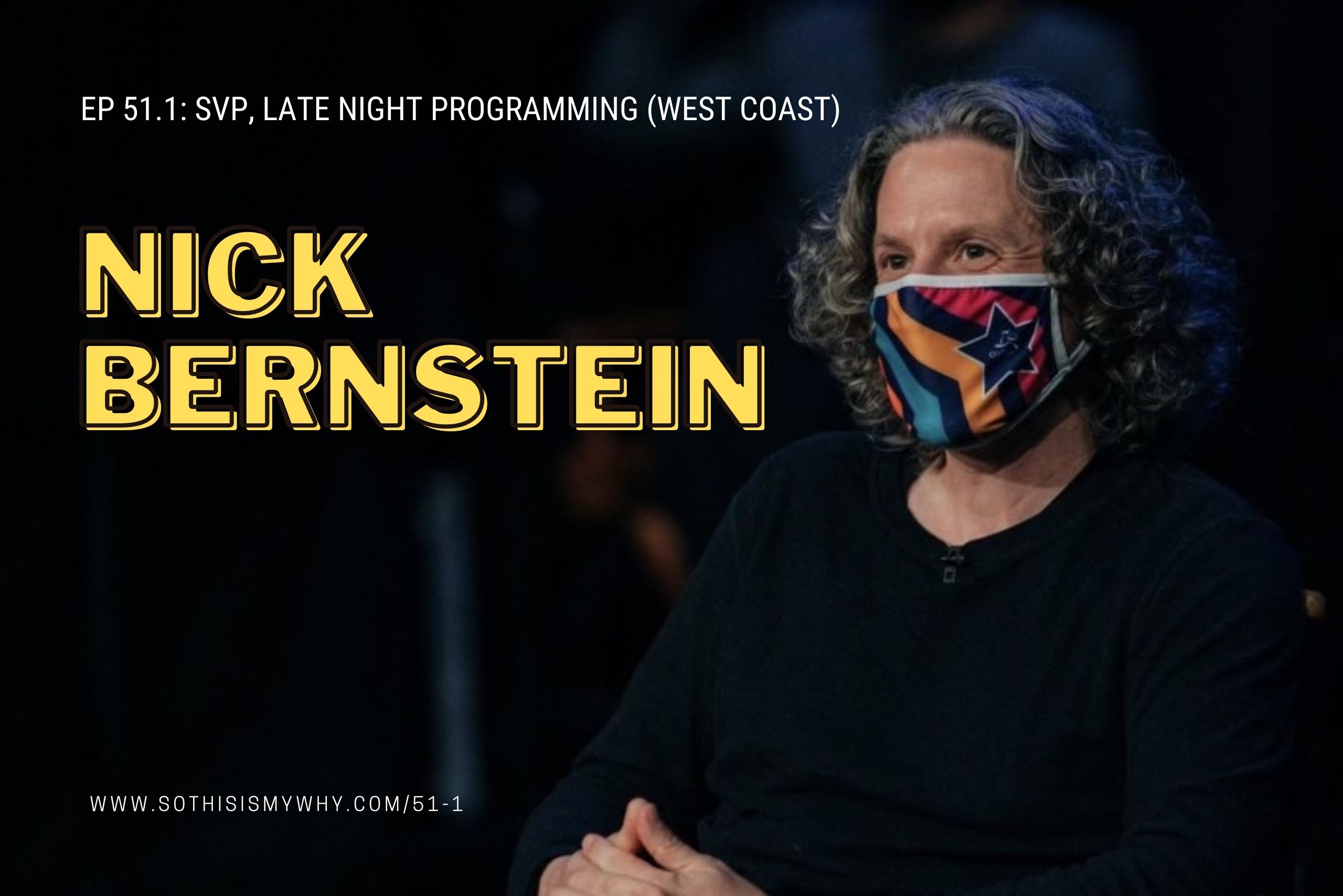 Nick Bernstein is the Senior VP of Late Night Programming (West Coast) at ViacomCBS & is the executive in charge of the Late Late Show with James Corden.

​
In Part 1, we explored what it was like growing up in Maryland and how he would spend 4 hours every Sunday morning charting America’s Top 40 biggest hits on radio, the impact that Camp Taconic had & continues to have in his life, and how he ended up being an NBC page & working with the legendary late night television executive, Rick Ludwin.

​
In Part 2, we explored how Comcast’s 51% acquisition of NBC Universal impacted Nick personally, how he ended up being the executive producer of the Pete Holmes show & ultimately (currently!) the executive in charge of the Late Late Show with James Corden.​

In particular, how Nick ended up in front of the cameras! And some of the hilarious things that the Late Late crew had gotten up to recently, including trying to get “free stuff from big corporations” on air like free athleisure wear & cruise trips. Because, well, why not. 😅
​

To catch up on Nick’s episode, visit:

​Other places to listen to: Stitcher, Listen Notes​

STIMY Episode 51 features Nick Bernstein of how he started from being an NBC page to working on late night shows including the Pete Holmes show and now, the Late Late Show with James Corden.

We are all guilty of slipping up at times.

​As a HBO intern did on 18 June – having sent an empty test email to a portion of HBO Max’s mailing list.

​HBO mentioned it on Twitter, and it’s a thread that has since gone viral. Where you will see a lovely outpouring of other people sharing their own stories of messing up and that even when it seemed like the “end of the world”, everything worked out in the end.

You learn, you move on.

We’re all humans in the end. 😊

Article: A Project of One's Own by Paul Graham

Who is Paul Graham?

I thought this was a beautifully written essay on the importance of pursuing projects of your own, and how when you pursue something you’re genuinely interested in, it ceases to be work. And renders the whole obsession with work/life balance obsolete.

Pursuing projects doesn’t equal happiness. More often than not, there’s a fair amount of anxiety or confusion. But the project is exciting. It engages you. And in the process of pursuing that project, you find your pockets of happiness. And opportunities to collaborate with people.

My favourite part of the essay:​

Many kids experience the excitement of working on projects of their own. The hard part is making this converge with the work you do as an adult. And our customs make it harder. We treat “playing” and “hobbies” as qualitatively different from “work”. It’s not clear to a kid building a treehouse that there’s a direct (though long) route from that to architecture or engineering. And instead of pointing out the route, we conceal it, by implicitly treating the stuff kids do as different from real work.
​
Instead of telling kids that their treehouses could be on the path to the work they do as adults, we tell them the path goes through school. And unfortunately schoolwork tends be very different from working on projects of one’s own. It’s usually neither a project, nor one’s own. So as school gets more serious, working on projects of one’s own is something that survives, if at all, as a thin thread off to the side.
​
It’s a bit sad to think of all the high school kids turning their backs on building treehouses and sitting in class dutifully learning about Darwin or Newton to pass some exam, when the work that made Darwin and Newton famous was actually closer in spirit to building treehouses than studying for exams.
​
If I had to choose between my kids getting good grades and working on ambitious projects of their own, I’d pick the projects. And not because I’m an indulgent parent, but because I’ve been on the other end and I know which has more predictive value. When I was picking startups for Y Combinator, I didn’t care about applicants’ grades. But if they’d worked on projects of their own, I wanted to hear all about those.

A article that shows how some companies/people started very very small, and grew very very big. From cosmetic companies to startups to media empires and podcasters like Joe Rogan.

The Statement - by Crystal Pite

In many places, things are beginning to open up. And in London, the arts scene is starting to come alive again.

​You may recall that back in Episode 6, Ashley Dean (First Artist, The Royal Ballet) was featured as a STIMY guest.

She recently performed in The Statement – a stunning contemporary piece by Canadian choreographer & director, Crystal Pite. It is all about how “The Guy” from Upstairs (the one in black) has come down to take a “Statement” from the other 3 dancers of something that went wildly wrong.

And get this: They dance to spoken word.

I would’ve never thought it possible to make pure spoken word so thrilling to watch, but it is. And you can catch a 1:46 min glimpse of the piece HERE. You can watch the dress rehearsal here and/or stream the entire perform from the Royal Opera House here (but access is only until 27 June!)

​I’ve been on a bit of a Crystal Pite binge. If you like what you see, I’d recommend looking her past works up on YouTube. And here’s another favourite of mine: The Seasons’ Canon (Autumn).