A list of all the episodes you will find in the So This Is My Why podcast that features people working in the creative industry, including show notes, links and other episodes that you might find interesting. Past interviewees include artists, dancers, stunt actresses, photographers, writers and more. 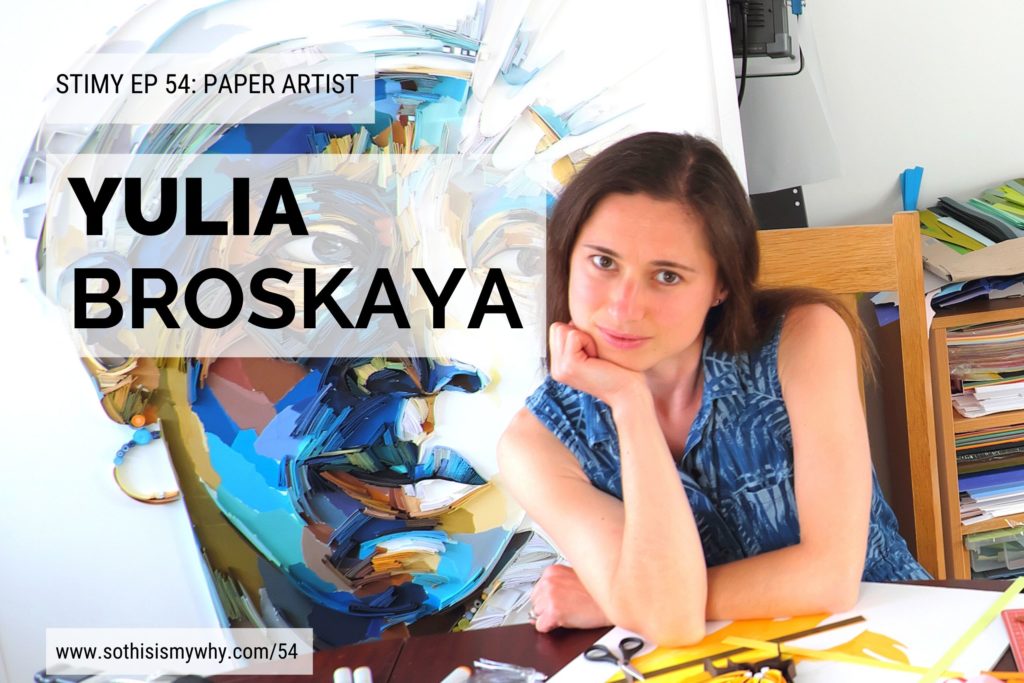 Yulia Brodskaya is a Russian paper artist known for pioneering the art of paper quilling, whose works have been collected by Oprah Winfrey, Wimbledon & Hermes. 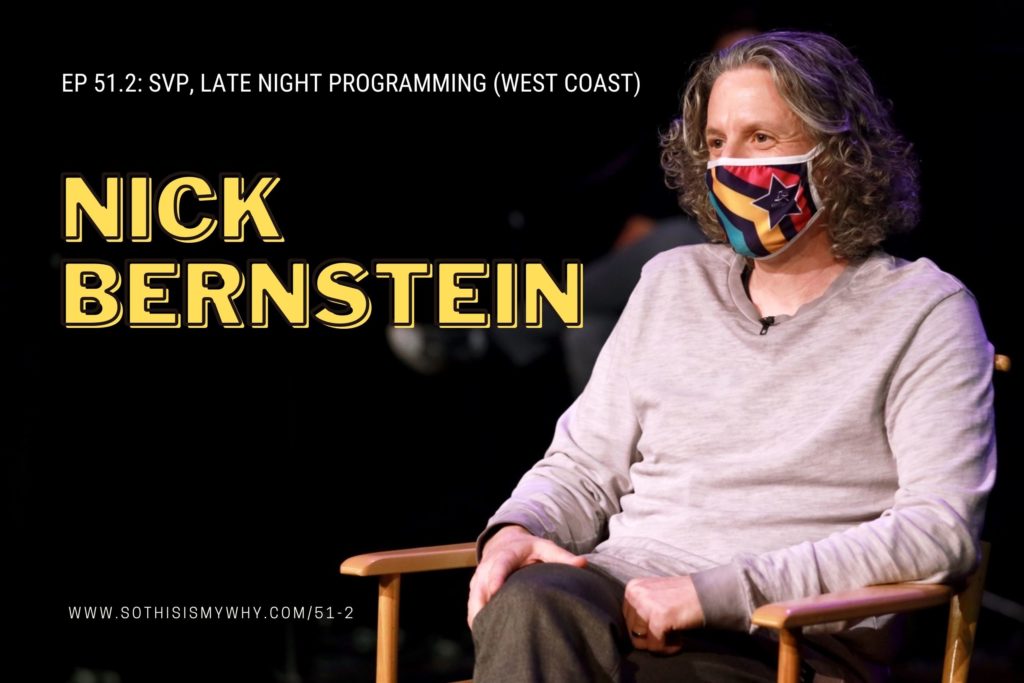 Nick Bernstein is the Senior Vice President of Late Night Programming (West Coast) at ViacomCBS & is the executive in charge of the Late Late Show with James Corden.

In Part 2 of this episode with Nick, we explore how the Comcast acquisition of NBC Universal impacted Nick personally, how he ended up being the executive producer of the Pete Holmes show & ultimately (currently!) the executive in charge of the Late, Late Show with James Corden and ALL things related to the CBS show, including how they pivoted during the global COVID-19 pandemic and how Nick himself ended up in FRONT of the cameras! 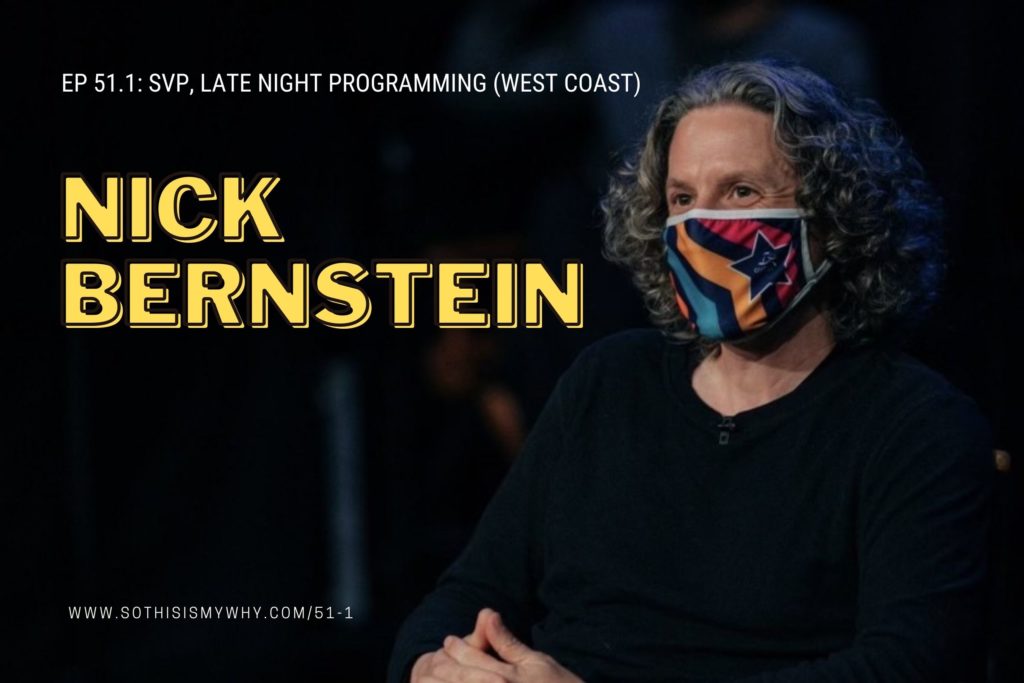 Nick Bernstein is the Senior Vice President of Late Night Programming (West Coast) at ViacomCBS & is the executive in charge of the Late Late Show with James Corden.

In Part 1 of this episode with Nick, we explore what it was like growing up in Maryland and how he would spend 4 hours every Sunday morning charting America’s Top 40 biggest hits on radio, the impact that Camp Taconic had & continues to have in his life, and how he ended up being an NBC page and working with legendary late night television executive, Rick Ludwin. 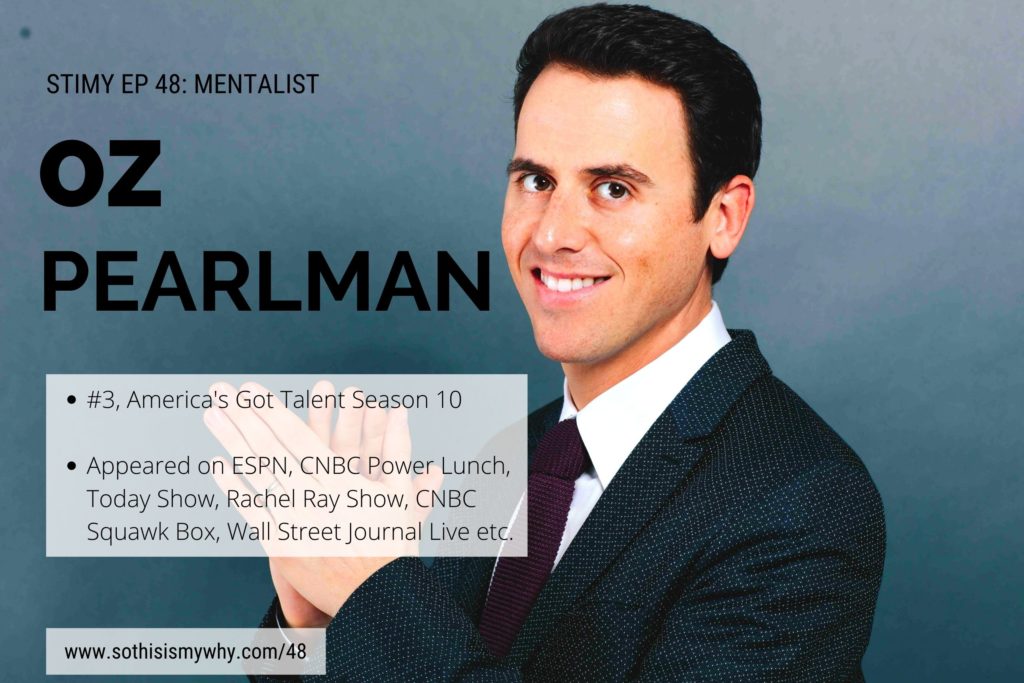 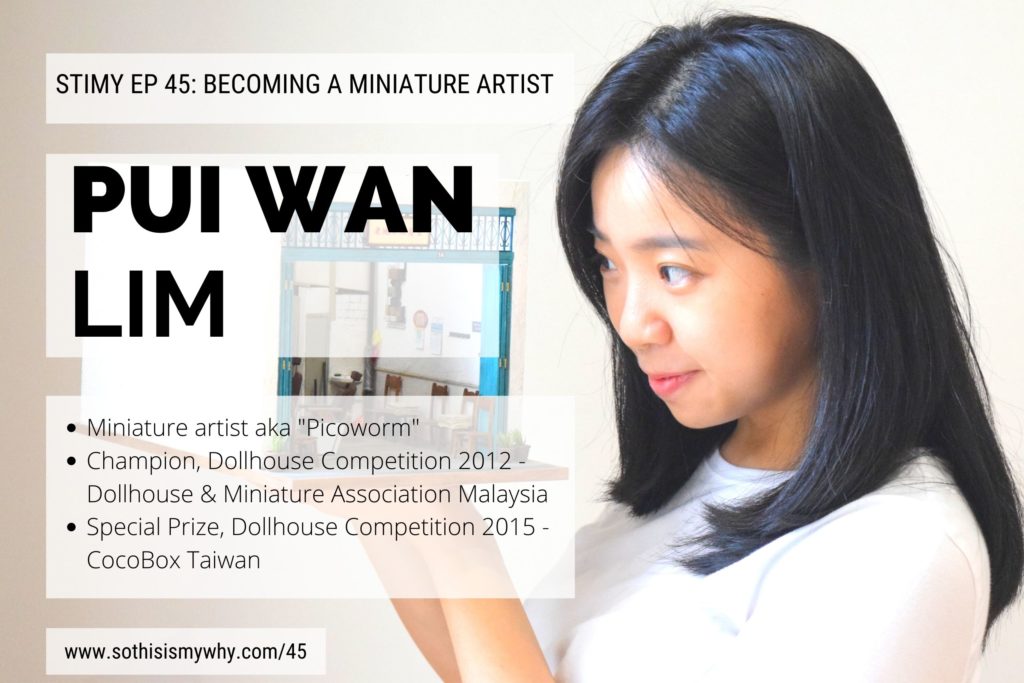 Lim Pui Wan is a Malaysian miniature artist who discovered her love of miniatures at the age of 14 and has, since 2014 under “Picoworm”, become a full-time professional miniature artist. In 2020, she was even part of Ryan Reynold’s “Ryan Doesn’t Know” Snapchat series! 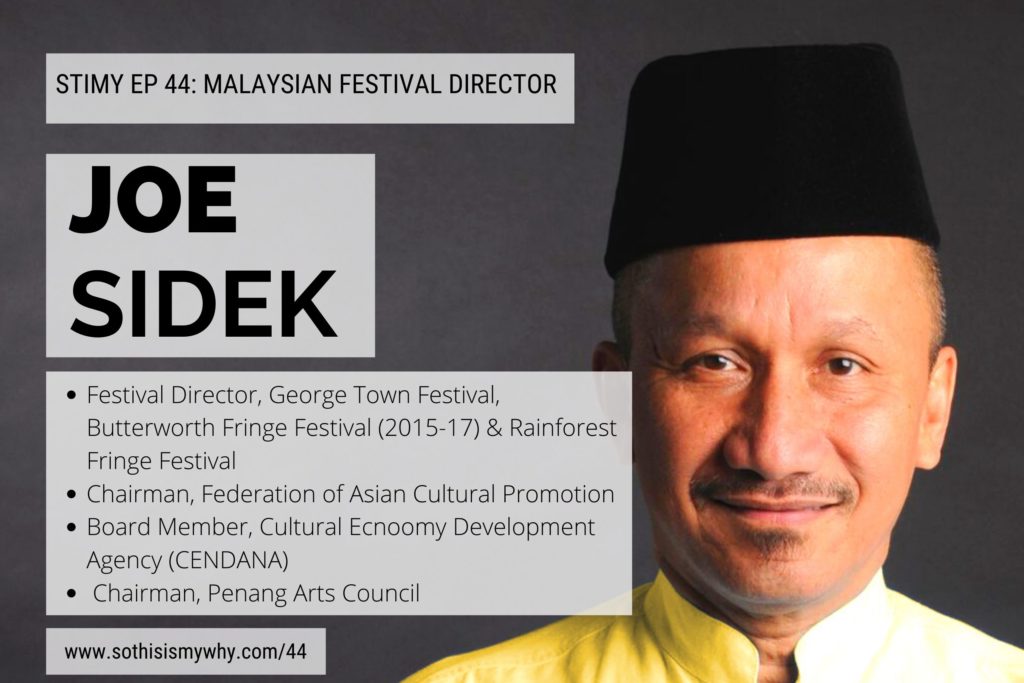 Best Known as director of the George Town Festival, Joe Sidek has established himself as one of Malaysia’s strong advocates for the arts.

Before taking up the position of festival director, Joe Sidek played major roles in various forms of art expression – from event management, art curator-ship, restaurant ownership and even costume design. A lesser known fact about Joe is that he still runs his family–owned textile chemical factory, Chemdyes Sdn Bhd.

With his industrialist background, entrepreneurial nature and his visionary passion for the arts, it is no surprise that 8 years after his appointment as festival director of GTF in 2010, the festival has grown incrementally ever since. Alongside GTF in 2018, Joe also directed the 3-year-old Rainforest Fringe Festival in Kuching, having founded the festival in 2017. He also helmed the Butterworth Fringe Festival for 3 years (2015–2017) and earlier in 2014, he brought Tropfest, the world’s largest short film festival to Southeast Asia and showcased the inaugural Tropfest South East Asia in Penang.

He has been invited to speak regionally and internationally in cities like Brisbane, Taipei, Seoul, New York, Salzburg, Hong Kong, Jakarta, Chiang Mai, Seoul, Gwangju, Shanghai, Adelaide, Yokohama and Malta among others about his role in placemaking, advocacy of the arts and about Penang.

He is 2020-2022 chairman of Federation of Asian Cultural Promotion, an industry expert on the industry panel of Malaysian federal agency for the arts and culture, Cultural Economy Development Agency (CENDANA), and chairman of Penang Arts Council. 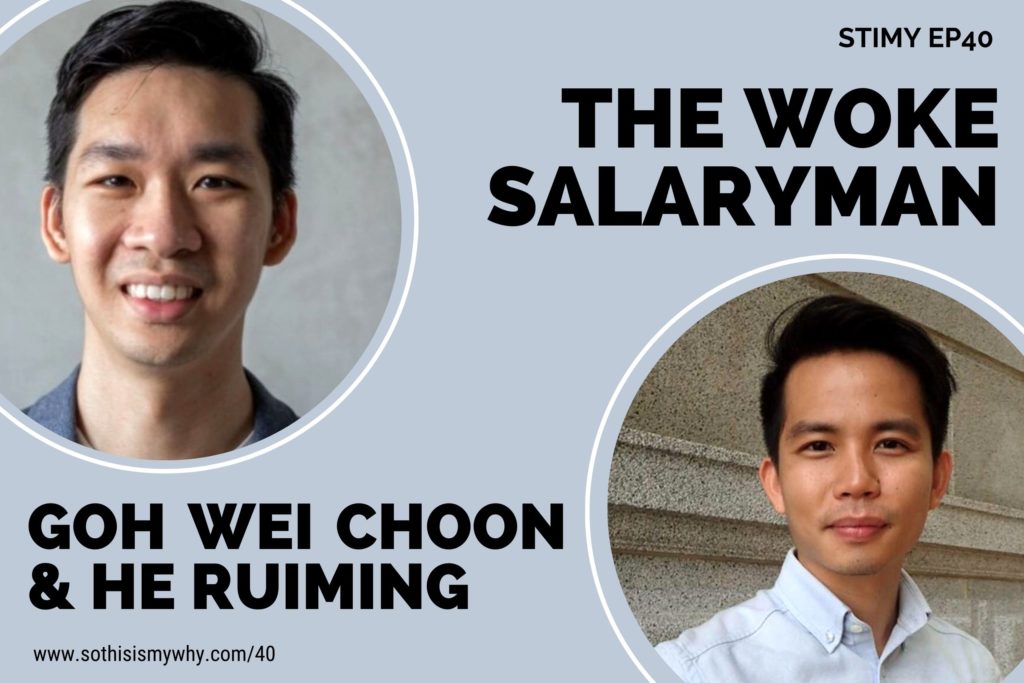 He Ruiming & Wei Choon Goh are the founders of The Woke Salaryman: a viral personal finance page that teaches people about making better financial and life choices through the use of unique but easy-to-understand comics. 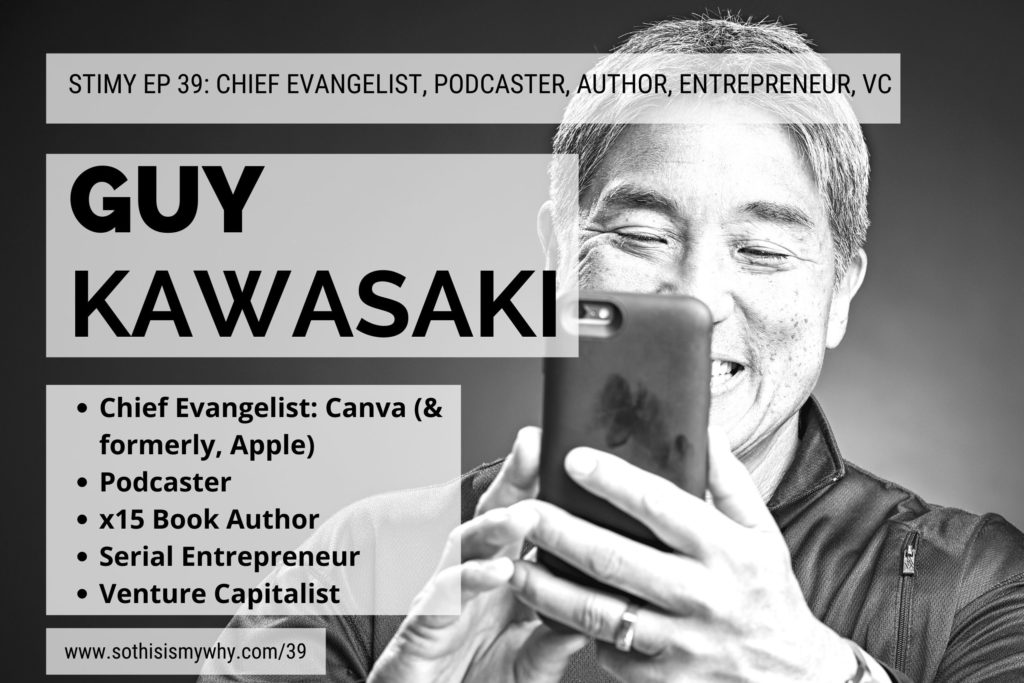 Guy Kawasaki is the chief evangelist of Canva and the creator of Guy Kawasaki’s Remarkable People podcast. He is an executive fellow of the Haas School of Business (UC Berkeley) and an adjunct professor of the University of New South Wales. He was the chief evangelist of Apple and a trustee of the Wikimedia Foundation. He has written Wise Guy, The Art of the Start 2.0, The Art of Social Media, Enchantment, and eleven other books. Kawasaki has a BA from Stanford University, an MBA from UCLA, and an honorary doctorate from Babson College. 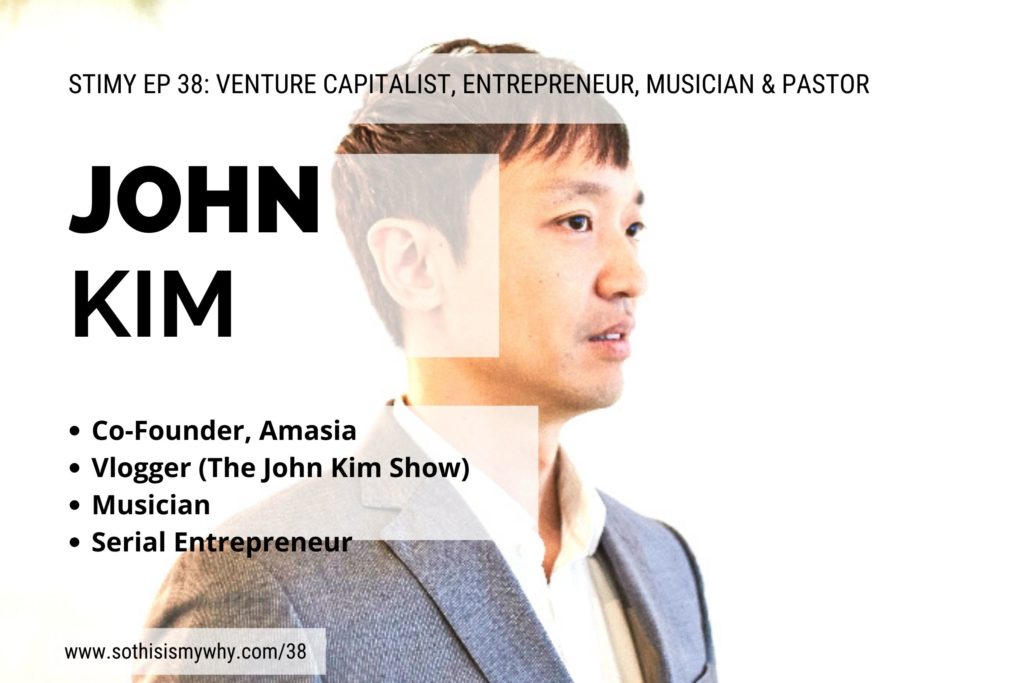 John Yohan Kim serves as Managing Partner at Amasia, a cross-border venture capital firm that helps technology companies get global. He is a Kauffman Fellow, a Term Member at the Council of Foreign Relations, a member of the Young Leader’s Circle at the Milken Institute and serves on various corporate and non-profit boards including those of Dialpad Communications, Kairos Society Asean and the Choson Exchange.

But before all that, John began his career as a serial entrepreneur, founding a music internet and e-consulting business called The Y Group before joining as a violinist in the Ally, where he toured around the US and collaborated with top artists across the US and Korea, most notably receiving a platinum record for contributing to an album with Grammy Award winner, Brandy.

All of that ended when John realised that he was still depressed despite pursuing his passion in music and during one performance, he heard God’s voice calling him to come home. Which kickstarted a journey that took him from the USA to Korea and now, Singapore. 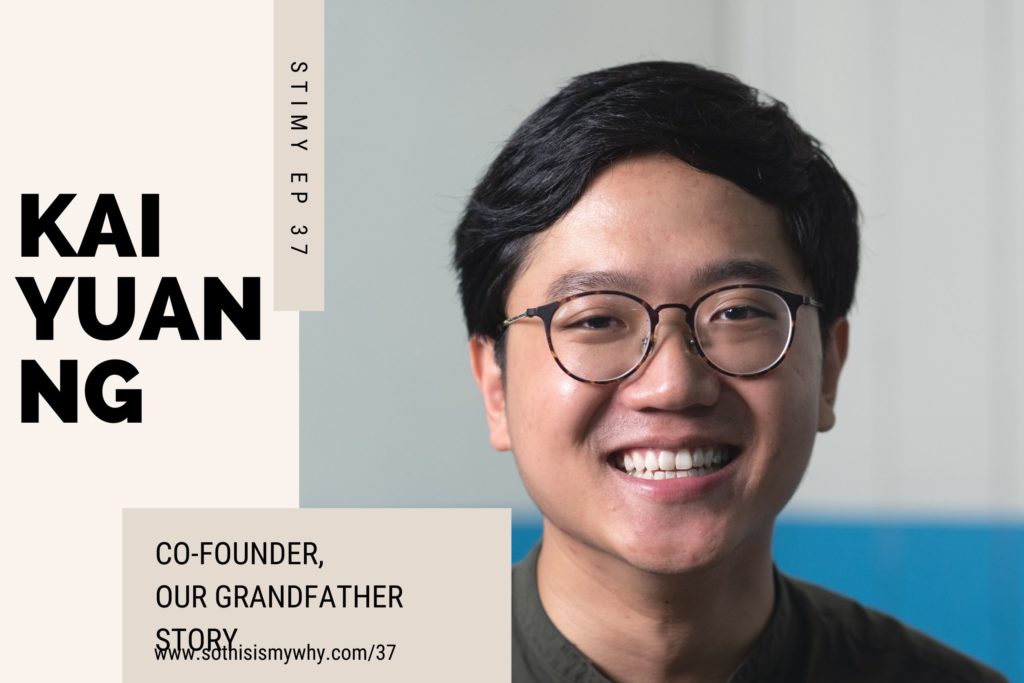 Ng Kai Yuan is the co-founder of Our Grandfather Story: a Singapore-based digital publisher dedicated to uncovering timeless and overlooked stories across Southeast Asia.